Three Fourteen is a five-piece high energy rock/reggae/blues/jam band from the Philadelphia area formed in 2014. The band plays original music as well as some of their favorite covers: Grateful Dead, Bob Dylan, Bob Marley, Stevie Wonder, and many more classics and surprises. Three Fourteen is a group of like minded individuals that have joined together to incorporate their experiences into one mash-up of music. A young four piece band composed of old souls: Andy Hionides (guitar), Joe Acri (bass), Josh Lassoff (drums), Jamie Lundmark (violin), Gerald Smith (guitar). They perform flavorful, protracted sets of reggae and blues-influenced rock with strong vocals. Some songs consist of clear-cut melodies with order, while others offer a sense of flexibility with heavy, variable jams. Three Fourteen creates clever setlists that are known to incorporate surprise medleys and teases as the night heats up. They are truly one of those bands that you have to see live to understand. 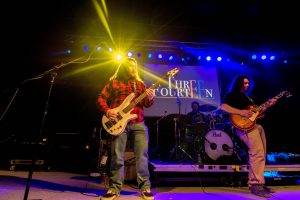